BLOG A look into the role of Robin Hood! 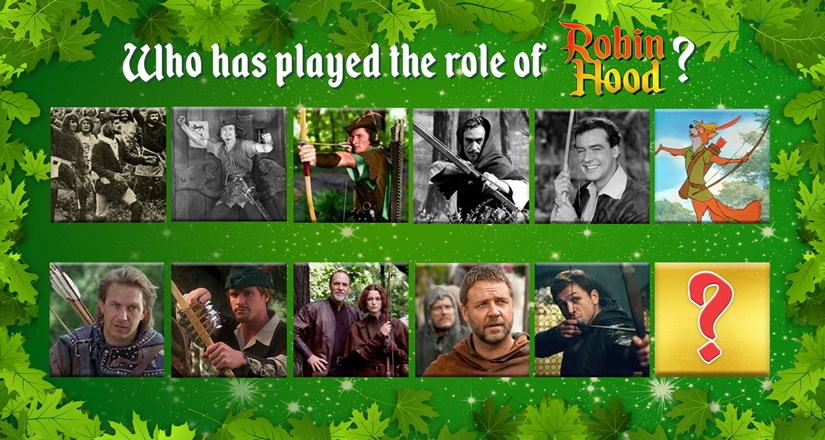 Our Pantomime Production team from Little Wolf Entertainment are currently on a very important quest – to find an actor to play Robin Hood in this year’s panto at Solihull’s Core Theatre. Whoever they choose will be joining a long and laudable line of actors who have all portrayed the roguish outlaw with a heart of gold!

Robin Hood’s first appearance on the big screen came in 1912, in a silent 30 minute film, where the eponymous hero was played by Robert Frazer.

Douglas Fairbanks’ Robin Hood was one of the most expensive films of the silent era, apparently costing something in the area of $1.4 million (in 1922! That would equal nearly $15million/£13million today).

Fairbanks himself put up $1million to fund the production, made at the studio he co-owned, making him responsible for its success or failure. He even insisted on building a new studio, despite the qualms of his brother John, who was in charge of the company finances. ‘Robin Hood should be made lavishly, or not at all,’ Fairbanks had insisted!

The film was a box office success, grossing $2.3million, which made Fairbanks’ efforts worthwhile!

Errol Flynn’s Robin Hood is perhaps one of the most well-known portrayals of the character, and has served as a benchmark for productions of later Robin Hood films.

In 1953, The BBC transmitted the first ever television series of Robin Hood. Comprising of just six 30 minute episodes, the entire series was filmed and broadcast LIVE, starring Patrick Troughton (of Doctor Who fame) as Robin.

In 1955, ITV produced 39 half-hour episodes of The Adventures of Robin Hood. The show went on to film a total of 143 episodes, all in black and white, starring Richard Greene in the title role, which became the defining role of his acting career.

Disney’s classic Robin Hood is perhaps the best-known animated adaptation of the classic tale. However, the biggest diversion is probably the fact that the title character is indeed a fox! But how did that come about?

Around 1937, Walt Disney became interested in adapting the twelfth-century legend of Reynard the Fox. However, the project was never realised due to concern that Reynard was an unsuitable choice for a hero.

Following the Aristocats (1970), Walt Disney Studio executives favoured a classic tale as the subject for the next film. The studio’s Art Director Ken Anderson suggested the tale of Robin Hood, which was received enthusiastically. He blended the earlier inspiration of Reynard the Fox with the storyline of Robin Hood, by incorporating the idea that the fox character could be sly but still use his skills to protect the community.

Robin Hood: Prince of Thieves is perhaps one of the most memorable adaptations of Robin Hood, starring Kevin Costner as Robin Hood, with a supporting cast including Morgan Freeman, Christian Slater and Alan Rickman. The box office hit grossed over $390million worldwide, making it the second highest grossing film of 1991 – coming second only to Terminator 2: Judgment Day!

This twist on the classic tale starred Keira Knightley as Robin Hood's (played by Stuart Wilson) heroic teenage daughter, Gwyn, who takes over her father's role and comes to his rescue.

Sir Ridley Scott’s 2010 film starred New Zealand born actor Russell Crowe as Robin Hood. Crowe received a significant amount of ‘stick’ for his interpretation of a Midlands accent, and famously stormed out of a BBC 4 interview with Mark Larson, following the suggestion that it sounded more Irish!

The latest cinematic adaptation of Robin Hood starred Taron Egerton in the title role. You may recognise Egerton from his starring role as Gary "Eggsy" Unwin in the Kingsman films, or from playing Elton John in the 2019 biopic Rocketman.

You’ll just have to wait and see, but we’re confident that whoever picks up Robin’s bow and arrow will live up to his predecessors!

You can book your tickets for our pantomime online here or phone box office on 0121 704 6962 for further information.

Share BLOG A look into the role of Robin Hood! with Friends...