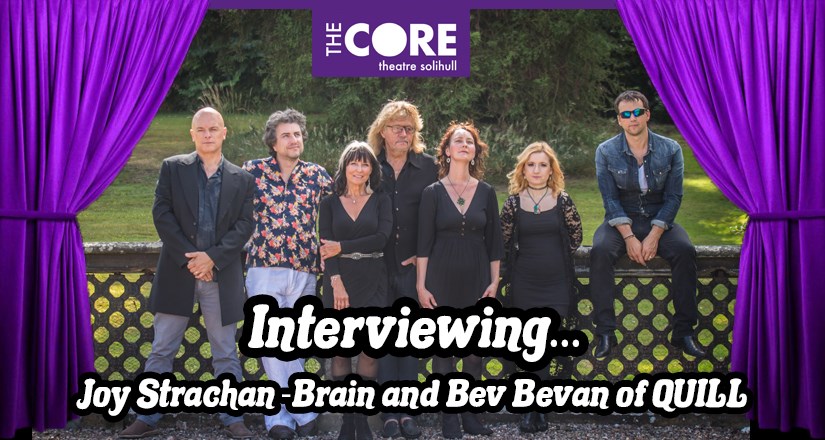 QUILL are returning to The Core Theatre for 2020, and this year they are joined by their newest member, legendary drummer Bev Bevan, who is known to audiences all over the world as a member of ELO, The Move and Black Sabbath. I had the opportunity to catch up with Joy Strachan-Brain and Bev, ahead of their show on 7 March.

Bev has been touring with the band for roughly 18 months now, and Joy says that he plays a very exciting part in their new line-up, making the drums and percussion more dynamic as he and long-standing band member and percussionist Andy Edwards make swaps throughout the show.

Bev revealed that one of the many highlights of touring with Quill was playing the Birmingham Symphony Hall for the Radio WM Christmas Concert, where they were joined by his old mate Brian Travis, sax player with none other than Birmingham’s own UB40. “Brian joined Quill for a rendition of “Rockin Around The Christmas Tree” and it bought the house down!” says Bev.

The Radio WM concert also saw the release of Quill’s brand new CD Ghosts of Christmas , which features 10 new tracks including the festive title song, all of which will be played on their upcoming tour date. However, that’s not all, as Bev adds that “we are including some songs from my musical past, great versions of Blackberry Way, Flowers In The Rain (the first record to be played on radio one in 1967) , Don’t Bring Me Down  and Telephone Line from ELO and even my favourite song from my time with Black Sabbath in the 80s Heaven and Hell.”

However, amongst all the new, fans can expect Quill favourites Say It Ain’t So, Bells of Rhymney and Nine Mile Camp, plus a Quill classic from the 90’s - a lively version of Over The Hill’s And Far Away, and other songs that Quill fans will know and love.

The line-up change marks an exciting new era for Quill, as Joy reckons that “although we’ve had our share of different line-ups over the years, including some amazing musicians, none have been better than this current lineup!”. They are delighted to be returning to the Core Theatre, a venue they’ve played multiple times. When asked why they return so often to the Core Theatre Solihull, Joy remarked that “It’s a lovely intimate venue, where we get an audience of very loyal Quill fans, and we’re hoping to see a Bev Bevan following this year as well.”

Make sure you get your tickets for what promises to be a fantastic night of music, for Quill fans new and old! Buy tickets here.