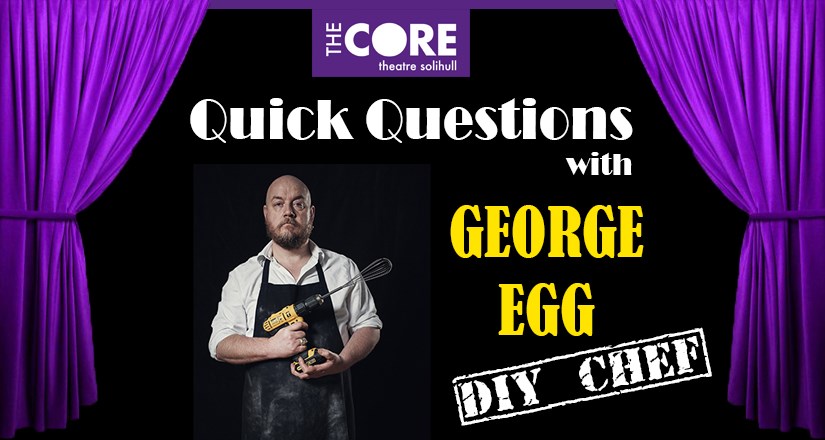 George Egg DIY: Chef is headed to the Core on Friday 18th May. During an inspiring and inventive evening of stand-up comedy and live cooking, George will be preparing a breakfast, a lunch and a dinner using the most unconventional of methods, featuring gardening tools, office stationery and more. I can guarantee, you've never seen cooking done like this before!

I have to say that I was very intrigued when I read the description of George's show, and I was fascinated to find out more. Despite his busy tour schedule, George was kind enough to fit in a quick interview with me, and I got to learn a little bit more about his unique combination of cookery and comedy, and how the show DIY Chef came to be...

How did you get into cooking and stand-up comedy, and what led you to mix the two?

My dad did most of the cooking at home and my brother and I have both inherited that interest. Stand-up, well I saw a circus when I was 16 and it blew me away. It was a crazy anarchic French circus called Archaos - no animals, very ‘Mad Max’ and I knew I had to get into that world. I started as a street performer and from there sort of drifted indoors into comedy clubs.

What inspired you to start your somewhat unorthodox method of cooking?

I’ve been into cooking for as long as I’ve been a stand up (about 20 years!) and the two passions have run hand in hand until about five years ago. I’d been cooking food in my hotel room after shows using the appliances that the hotel unwittingly provided (iron, trouser press, hairdryer etc.) and I decided to turn it into a show. I did my first solo food/comedy show (George Egg: Anarchist Cook) in 2014 and in it I made a meal using howe room equipment. I took that show to Edinburgh and toured it for a couple of years all around the UK including a lovely visit to The Core, and overseas too. When that show had sort of run it’s course I knew I needed to come up with another and having a huge interest in all things DIY I next turned to the shed and the tool box and DIY CHEF was born.

Are there any tools/equipment that you would advise people NOT to cook with?

No there aren’t. This show is about experimenting, playing, bending or even breaking rules, being brave and innovative and creative. I’d say use anything. But do be careful.

What is the worst meal anybody has ever given you?

My taste in food is all over the place and I’m not in the least bit snobbish. I like fresh oysters, but then I also love a McDonalds breakfast and I have the chocolate appetite of an infant (Kinder Egg over 90% cocoa-solids any day!). So even the trashiest food has an appeal. I suppose it’s when there’s no care or passion from the person making it that it falls down.

You’ve performed at the Edinburgh Fringe for the last 3 years. What is the highlight of being there?

It’s the best festival in the world with stuff happening everywhere and all the time. I think the highlight for me is the intensity that it maintains for an entire month.

Your show DIY Chef is definitely unique, but would you say you have any inspirations, either in cooking or comedy?

Certainly I do. In the world of comedy I love so much stuff but gravitate towards people who are doing something beyond straight stand-up. So Bill Bailey with his music and silliness, Tim Key with his poetry and theatrics, Alex Horne and the Horne Section. And in the world of food again there’s so many. I love the passion and enthusiasm of Gennaro Contaldo, and the slightly washed-up world weariness of Rick Stein. There’s a fantastic cook and communicator online called DJBBQ who does, well, BBQ who you really should look up. He’s just realised a great book called ‘Fire Food’ too.

It was really fantastic catching up with George, and I hope everyone else is just as intrigued to see DIY Chef as I am! I will be meeting George before the show for another instalment of "Spotlight On..." (If you missed the first, it's available here.) so please stay tuned for more exciting behind-the-scenes exclusives!