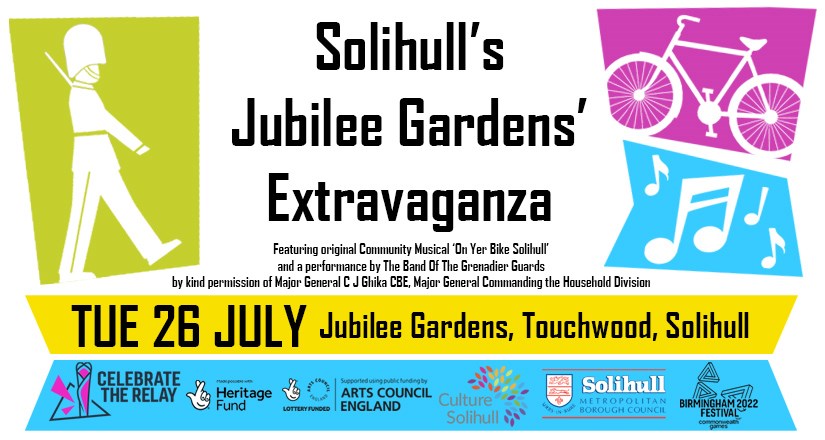 Enter the ballot for the musical and entertainment extravaganza in Jubilee Gardens.

APPLY FOR TICKETS VIA BALLOT HERE

On Tuesday 26 July, Solihull will be holding a musical and entertainment extravaganza in Jubilee Gardens including a specially commissioned new musical called On Yer Bike as part of the Birmingham 2022 Festival.

Also included, will be a special performance by the Band of the Grenadier Guards who will arrive at the stage having escorted the Queen’s Baton relay through Solihull Town Centre as part of the Baton’s visit to the Borough. The Band of The Grenadier Guards are performing by kind permission of Major General C J Ghika CBE, Major General Commanding the Household Division

The event will have restricted capacity and Solihull residents can apply for free tickets to be a part of this amazing occasion, which will take place at Jubilee Gardens (on the Homer Road side of Touchwood in Solihull town centre).

The lucky ticket holders will be treated to an evening’s entertainment in Jubilee Gardens, starting in the early evening with performances by a variety of artists, until the final Batonbearer of the Queen’s Baton Relay enters the arena, accompanied by the Band of The Grenadier Guards. The band will then play half an hour of favourite tunes before On Yer Bike takes centre stage.

Solihull’s Musical Finale will be headlined by a performance of On Yer Bike, a musical celebration of the history and future of cycling including Solihull’s contribution to the story of the bicycle. Produced by Parrabbola for Culture Solihull, it’s sure to be fun for all the family and is a special event in Solihull as part of the Birmingham 2022 Festival

To apply for tickets please fill in this short application form. Applications will close on Sunday 10 July recipients will be chosen by ballot. Successful applicants will be contacted after the ballot has been completed. You can also apply in person at The Core in Solihull town centre during box office opening hours.

Tickets via Ballot only